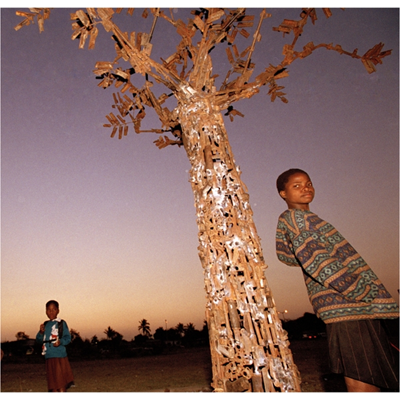 This is an interesting project you may have heard about. The above sculpture of a tree was created entirely from decommissioned AK-47s.

The Tree of Life was made by four Mozambican artists: Cristovao Canhavato (Kester), Hilario Nhatugueja, Fiel dos Santos and Adelino Serafim Maté. It is a product of the Transforming Arms into Tools (TAE) project and is made from decommissioned weapons.

TAE was set up by Bishop Dom Dinis Sengulane in 1995 and is supported by Christian Aid. During Mozambique's civil war, which lasted from 1976 to 1992, millions of guns and other weapons poured into the country and most of them remain hidden or buried in the bush. The project is an attempt to eliminate the threat presented by the hidden weapons. Mozambicans are encouraged to hand them over in exchange for items like ploughs, bicycles and sewing machines. In one case a whole village gave up its weapons in exchange for a tractor. (more here)