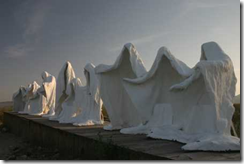 The first Tuesday in November is known as Election Day in the United States. It is the day on which political candidates are voted in or out of office.

The word candidate is an example of how ancient customs become embedded in language.

In ancient Rome, a person running for an elected office wore a brightly bleached toga. Candidatus means “white-robed.” The word for the clothing became attached to the person.

The Latin noun candidum, meaning “white, pure,” or sincere,” came from a verb meaning “to shine.” Our word candle is related to these words.

The adjective candid shares the same etymology. A candid person is honest, forthright, and free of deception.

A candid photo is one that is not posed.

Candid Camera was a popular television show produced by Allen Funt that began as a radio show, Candid Microphone, in 1947. It was perhaps the earliest “reality show.” Funt and his assistants would set up a hidden camera and play various tricks on passers-by, recording their spontaneous reactions.

The protagonist of Voltaire’s little book of the same name is called Candide because of his innocent, open nature.

George Bernard Shaw’s play Candida features a woman of that name who is motivated by honesty and self-awareness.

Let’s hope that all those candidates who win on Election Day will be candid with their constituents.