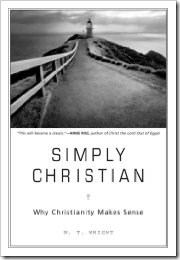 Wright arranges all of his sub-points around these four main controlling topics: Justice, Spirituality, Relationships, and Beauty.

The emphasis of this book is that Christianity runs deep within a person and effects every part of a persons life; it changes the way a person sees the world (as God’s New Creation) and his or her own participation in the world (building for God’s Kingdom here on earth).

This book is intended for audiences that have serious questions about Christianity whether in the faith or not in the faith. Serious readers will come away from this book educated, encouraged and exhorted all at once and energized to build for God’s Kingdom.

This is a great read. Wright has a way of making hard to understand spiritual concepts accessible. This would make a good for just you or your whole book study group.