Book Review: The Future of Justification 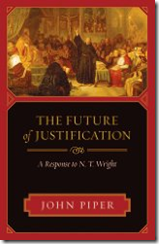 N.T. Wright is an incredibly popular and engaging writer. He’s saying things in a new way and that has everybody (especially those enthralled to Reformation Theology) a little jumpy. Wright is an incredibly engaging and talented communicator both in written and spoken word. He has helped and emerging generation of church leaders look at church, the Bible, and the gospel in a fresh way.

Don’t mistake my use of the word “emerging” to mean Emerging Church (although Wright has made headway with those folks). Wright has become a premier Bible scholar and Bible interpreter in this generation. His work will be influential for years to come.

Thus, you have Piper’s need to write the book. Congregants hand him one of Wright’s books and ask him, “what about this guy?”

Piper takes issue with Wright’s take on the doctrine of Justification. In a nut shell, Wright tells what it does to a believer’s standing with God on the Last Day. Piper is convinced that Paul teaches the necessity to know what it IS, not just what it DOES. If one doesn’t know what it IS, then one’s understanding of what Christ accomplished on the cross will be misunderstood. In fact, what the church believes about Justification may be distorted for years to come due to Wright’s ever expanding influence.

The author’s thesis is that the righteousness of Christ and His perfect obedience is imputed to the believer once faith is placed in Christ. Piper makes the point that Wright believes God declares us righteous based on the work of Christ and includes us in His family. That Jesus defeated evil and sin and took our place on the cross. God vindicated Jesus by raising Him from the dead and in our identification with that (the resurrection) we, too, are vindicated. This is what Justification does. This is not good enough for Piper.

Piper makes a compelling argument, but I think it's weak. I’ve familiarized myself with the work of both these men and find my preference to lean more in Wright’s direction and method of biblical exposition than Piper’s. Piper, in my opinion, is more beholden to Reformed Theology and all his exposition is obviously and unashamedly run through that filter.

Piper takes a chapter to set up what Wright says about a subject and then in the next chapter, dismantles Wright’s thesis.

I think the book could have been half the size, maybe a quarter. I got Piper’s point early in the book. He’s given credit from many scholars as giving Wright a fair shake, but I don’t feel he has really made the effort to understand what Wright is saying. Piper, book reminds me of the character Jim Carrey used to play in a bit on In Living Color. Carrey’s plays the over zealous life guard of a hot tub. Carrey’s schtick is he gets on a bull horn and enforces rules that would be posted at a public pool. “Time for laps!” Carrey announces with a bull horn in a hot tub users ear.

Piper is doing laps across a hot tub.

If you like theology or Piper or Wright, you might enjoy this book. If you are not familiar with Wright but read most of what Piper writes, you’ll come away from this book thinking a) what’s the fuss all about, or b) Wright’s a heretic. It depends where you stand with Reformed Theology or your status in the John Piper fan club.

I think my membership’s been revoked.

Here are some links to get things straight from Wright if you plan on reading the book or you just want to see what the big deal is:

Mike is currently reading the N.T. Wright book about his views on justification. I don't agree with N.T. Wright either, but I do agree that John Piper sometimes beats a dead horse in his books. I think once you've read one of Piper's books, you've read them all. By the way, Driscoll is reformed too. :)

Driscoll is Driscoll. By the time he's done, Reformed Theology will look different, too.

This is the first time I've ever read your blog. But I had to comment - people get all in a tizzy about John Piper and think he is the greatest thing since sliced cheese, but his argument against Wright's in this book is shaky at best. Thank you for breaking it down and not being willing to accept an opinion, even if it is John Piper's. Although, really, what do I know...I do that with Wright. =)