There's woman on the ticket but it won't be Hillary 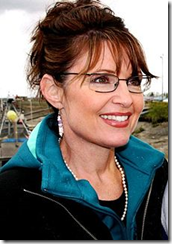 Who is Sarah Palin?

Here's her bio on Wikipedia:

Sarah Heath Palin (born February 11, 1964) is the current Governor of Alaska, and a member of the Republican Party. She is the youngest and first female governor of Alaska. Brought to statewide attention because of her whistleblowing on ethical violations by state Republican Party leaders,[1] she won election in 2006 by first defeating the incumbent governor in the Republican primary, then a former Democratic Alaskan governor in the general election. On August 29, the Associated Press reported that "speculation [has] moved to [Palin as a] darkhorse" pick for the vice president running mate slot by presumptive Republican nominee John McCain.[2] The CNBC news service is now reporting that Palin will in fact be the GOP vice-presidential nominee.[3]

She is reported to be a possible choice for the Republican Party's nomination as Vice President of the United States in the 2008 election. Formal announcement of the presumptive nominee will be made in Dayton, Ohio on August 29, 2008, by Presidential candidate John McCain.

I think this was a good move by McCain. Finally, someone on the ticket who has RUN something rather than just occupy a political seat.

I wasn't impressed when Obama picked Biden, another senator.

Here's a story about her on Fox News.

Here's Sarah Palin on the issues...

Interesting. She's a mother of a special needs child. She's been in the Army. Pro-life. Traditional view of marriage.

If you're looking for someone that is a non-Washington insider, you can't get any further away from the Beltway than Alaska...

im a prophet dude! i predicted this a couple of weeks ago after reading about her. good choice. im sure hillary is fuming that she is no longer the face of women in politics any more.

with all due respect, I take this choice as McCain no longer wanting to become president. that said, I now possess a curiosity as to the flavor of moose stew.

I love it. My spirit testifies that this is a good person. I just hope if she makes it to Washington that Washington doesn't corrupt her.