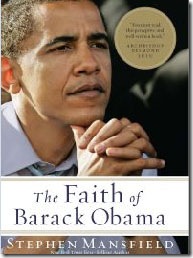 Stephen Mansfield, author of The Faith of George W. Bush, and The Faith of the American Soldier, does a great job of summarizing and getting to the point. He knows what it is you're curious about and gets to the answers in an engaging way. Indeed, the story of Barack Obama and his faith rings true. Many Americans will identify with Obama in their own tensions of living life before God and a watching world.

No doubt about it: Obama is a great story. He grew up with no father, no country, and no destiny. If he becomes president, few tales of political ascent will read like his. Mansfield makes a strong case and organizes his material well. The Faith of Barack Obama is a biography that chronicles his coming to faith while coming of age in Chicago’s South Side while becoming part of the community of worshippers at Trinity United Church of Christ.

Mansfield gives a balanced look at Obama’s faith. To keep the scales even, he writes a chapter on the faith heritage of Hillary Clinton, John McCain, and George W. Bush in the chapter he heads “Four Faces of Faith.”

In “The Altars of State” Mansfield compares the hellfire and brimstone bludgeoning Abraham Lincoln took from his preacher contemporaries to the beating Alan Keyes tried to give Obama during his 2004 senate race.

This book, my dear inquisitive, conservative, red-state Christian friend answers your questions about what Obama believes about Jesus, the Holy Spirit, the death of Jesus Christ, and His resurrection. It gives a look into his membership at Trinity United Church of Christ under the tutelage and mentorship of Reverend Dr. Jeremiah Wright. It discusses Obama's views on public dialogue about God, faith and religion. As these topics were opened up, the book became a real page-turner for me. I can't say I like or agree with Obama's politics and theology at every point, but I definitely acknowledge that God is at work in this man through his faith. His faith comes across, not as perfect or complete, but genuine. Honestly, there is probably more that I do agree with than disagree.

“This book is written in the belief that if a man’s faith is sincere, it is the most important thing about him, and it is impossible to understand who he is and how he will lead without first understanding the religious vision that informs his life,” writes Mansfield.

Mansfield's description of this man and how his faith influences what he does and who he is makes me less settled in my choice for president than I was before the mail man dropped the book off on my door step.

“Obama’s faith infuses his public policy, so that his faith is not just limited to personal realms of his life; it also informs his leadership.”

164 pages are contained between it's front and back covers including notes and index. It’s a quick read; give yourself about three or four hours to work through it. If you want to get to know a little about Obama’s Christianity, this will be time well spent.

Nice review. I'm also one of the Nelson reviewers, though I opted to do a series. Thought you might be interested.

Grace and Peace,
Raffi Shahinian
Parables of a Prodigal World