I got some 'splainin' to do 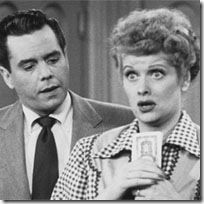 "Lucy!" yells Ricky Ricardo, "you got some 'splainin' to do."

Somebody pointed out on a previous post I published that I got the stats backwards. I felt pretty stupid when I realized that the person that took me to task in the comments was correct. I feel as stupid to the same degree as I felt giddy when I read the stats. The euphoria I felt should have been an indication that I was not actually in touch with reality. What else is new?

But I had it bass-ackwards.

The only time I open my mouth is to switch feet.

Bryon, do you want input from the "loyal opposition" or should I just keep my mouth shut?

Yeah....I'm not afraid of me, I'm afraid of offending others. That said, I favor gay marriage the same way I favor Mormon marriage, Jehovah's Witness marriage and most any marriage between two consenting NON related adults. I don't agree with Mormonism, JW's, etc. but in my opinion, they have a right to get married. Again, my opinion, homosexuals deserve the same right for the same or similar reason.

are you comparing homosexuality with non-christian religion?

the issue is not religion... it's males marrying males and females marrying females and the changing of laws and breaking of tradition to accommodate it.

homosexual activity is not racial or religious.

marriage is man's response (and instinct) to God's command, "go forth and multiply". that's His plan for all He's created.

and yet people who can't 'multiply' are still allowed to marry. How about the elderly? They likely are not going to have children, and yet no one denies them the right to marry. Regarding breaking traditions.....it's done all the time, sometimes for the good and sometimes not.
The thing that has brought marriage down is not homosexuality, it is sin, period. It is a lack of fidelity, a lack of devotion even in the face of difficulty. Folk up and quit their marriages for bad and sometimes legitimate reasons. Allowing homosexuals to marry is not going to make that better or worse in my humble opinion. Likely, there will be a similar number of dissolutions of marriage percentage-wise as there are in heterosexual marriages.

i acknowledge that divorce is treated very liberally. i'm preparing to perform a wedding next weekend in my family and i challenged the couple very seriously about an everlasting covenant.

marriage between a man and a woman has never been about rights. people with no "rights" are able to marry. slaves throughout history have been able to marry.

this is about REDEFINING marriage. the noun "marriage" or verb "to marry" has never, until now, needed modifiers like "homosexual" or "heterosexual".

this is about fringe behavior moving from secret places into the open. it's an attempt to remove public shame and guilt in the hope that private shame and guilt will go away. it's about a community of people with the same guilt and shame saying to one another, "I'm okay, you're okay. So let's make them let us get married."

I'll grant that a long campaign has been carried with many successes. I'm viewed as wrong, backwards, bigoted, narrow-minded, old fashioned for wanting to leave the definition of marriage alone.

just because someone got off-track (no matter who is at fault) somewhere in life does not mean that society has to accommodate him/her in a life that chooses to stay off-track.

I wish people who choose a lifestyle that accommodates homosexual activity would be more honest about their choices instead of forcing society to embrace same-sex culture.

Bryon, no one is forcing anyone. "re-define"? There used to be laws against bi-racial marriage. There used to be laws against African Americans voting. Society at that time had to be forced to change or those laws would still be on the books. Women didn't have the right to vote before, I believe, 1920.
I ask no one to embrace what they don't wish to embrace. No one is forcing heterosexuals to marry members of the same sex. This is about basic human rights, in my opinion.

As far as 'choosing' to be homosexual.....no more than you 'choose' to be heterosexual. That's just who you are.

Kat, the attempt to draw any parallel between gay "marriage" and any of the other examples you gave, including bi-racial marriage, is fallacious. No marriage by persons of different faiths, no interracial marriage, ever changed the fundamental nature and structure of a marriage: They always involved one man and one woman--well, except for the pluralists, who like one man marrying many women.

Only this issue of men marrying men or women marrying women really threatens to change the fundamental nature of marriage. And I'm not talking only about Western marriages or Western culture. I'm talking about something that goes far deeper than "rights" or changing social norms.

I'll start with the further deterioration, if not worse, of the family unit.

And, Kat, I don't intend to get into an argument. What I posted was true and documented, not mere opinion. You're free to reject it; that doesn't change the inherent truth.

I wasn't aware I was arguing. It's called a discussion. That's why I asked Bryon's permission. In my opinion, your 'tone' has been one of 'telling me off'. I've been respectful here and intend to remain that way. I could challenge 'documentation' but this is not the place. I desired a dialog, not an argument. I have not insulted you. And yet you have felt free to insult me. Bryon somehow found a way to disagree with me heartily and still regard me as an intelligent human being. No worries, I'm done.