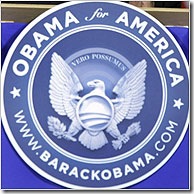 Presidential Candidate Barak Obama has re-worked the Great Seal of the United States by merging his trendy logo graphics with the art work first used in 1782.

Obama has also put forward, if you look closely at the seal, the latin phrase Vero Possumus, which means (loosely translated) "Yes, we can."

The word makes me think of the abundance of possum road kill up around rural Vero Beach. But that's just me. That doesn't have much to do with politics or anything. It's just word association for me personally. It doesn't sell.

I like the seal below best. Change politics and stop there. 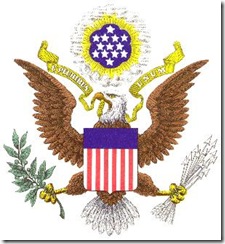 I could see this in ink on someone's bicep. It unforgettable. But Obama's artwork is quite forgettable.

Obamessiah is definitely arrogant. The media is so much behind him, McCain doesn't stand a chance. Think you'll ever see this clip on the news?
http://jmikewest.blogspot.com/2008/06/presidential.html

I'm going to say neither. I'm not offended by it, but neither am I necessarily inspired by it. Politicians wrap themselves in American symbols--in one form or another--quite often. It's like their hobby or something. That said, I'm not going to make a decision one way or another based on a logo his team cooked up.

I do think his misuse of this seal is pathetic: He calls himself the candidate of Change. But he can't find anyone--with all his money, with all the money his campaign has raised--he can't find anyone who has an ounce of originality??