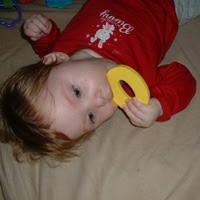 I wanted to share some highlights with you all from the report Deb the Magician has prepared for Ali's most recent evaluation.

Ali is now seen in the office two times a week. She tolerates her car rides now. Ali has made great gains over the last three months. Initially she was very irritable; however, this has decreased significantly to a normal level with her now being able to participate in therapy for up to an hour at a time. She may fuss or screech at times to indicate pleasure, displeasure, or indicate she wants a change of activity, but she rarely cries now during therapy sessions. Her irritability decreased dramatically once she started to eat orally and her g-tube feedings stopped completely.

She regulates her breathing with her swallowing. Ali has completely transitioned of her g-tube to oral eating with all medicine and nutrition taken orally. She just started to eat 1/4 cup of ground/pureed table foods 3 times a day with additional calories added to boost her caloric intake.

She has had one illness since eating exclusively by mouth, which required her to coordinate mouth breathing and sucking. She continued to drink her bottle during this time coordinating sucking-swallowing and mouth breathing. She is a dependent eater, as she does not effectively move her hands and arms to feed herself. She will try to help hold the bottle with one hand when she is relaxed. She can mouth pureed foods off her right hand.

She can now randomly move her tongue in various directions including in, out, elevate, rotate, and side to side. She an flatten, bunch and point her tongue randomly as well. Muscle overflow of sticking her tongue out in hard extension or tongue thrust is rarely seen now. She uses her tongue to lick objects that approach her mouth, which may be residual suckle reflex, it is hard to tell this point, as she appears to be enjoying mouthing the items. She is also able to make many vowel and early consonant sounds with this new tongue movement and control. She appears to enjoy making these sounds and enjoys people's responses when she makes sounds.

Motor Support for eating/speech and language

She is developing head control in sitting, but sits with a rounded lower back which does not support her upper trunk, shoulder, neck, jaw and tongue control for refined eating skills. This will need to be addressed in therapy. She does sit supported in a high chair now, but with rounded back, not on her sitz bone with a low back arch which is needed for optimal oral motor control for eating and speech. She has a difficult time coordinating hand-eye-mouth movement due to motor involvement. 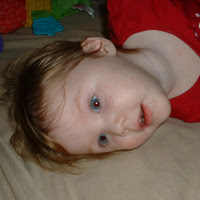 Ali was developing normally prior to her injuries. Her cognitive and communication skills have improved considerably over the last three months. It is highly likely that she is able to understand more than she can indicate at this time due to her poor motor control. She has scattered receptive speech and language skills through the 9-month skill level. Currently, she is able to turn take with vocalizations, she calms and anticipates events, she stops crying when someone talks to her, she searches for known voices, she searches for "mama" and "papa" when her name is mentioned, she stops or quiets in response to "no", she smiles at a familiar person, and she attends to music and singing. Her expressive speech language skills are severely delayed due to motoric impairment and are at the 5-6 month level.

It's really amazing to see the progress Ali has made. I'm so glad she has you and Susan to oversee her care and ensure she has talented people like Deb the Magician to rehabilitate her. God is so good.

Thanks for the update, Bryon. It gives us direction on how to pray for Ali and some praise reports to give to the kids too. She is a special little girl and so very determined!!

That's really a very positive report, isn't it? So much improvement, in there!

I realize SBS is not the same as our youngest grandkids went through (Rh babies, if you can believe that), but Ethan, at 18 months to 2 years, was between 6 months and a good year behind in many areas. Speech was seriously delayed, one arm was not often used, so much seemed to be wrong. But God's in His heaven and moved them across the country to a place where children's needs are taken very seriously. Ethan is now 4 years old, and you'd never know he'd had any problems. Same with his almost 6-year-old sister. Very bright, active, verbal kids.

What God has done for Ethan and Cassia, He can do--and is doing--for Ali. Thank you, Jesus!

I always found these types of reports, about my son, difficult to handle. Although they show progress, they also show problems. I pray that your family can concentrate on all the positive things that God has done and will do for Ali. I'm still praying daily for her and all of you.

Glad to read of all the improvements! I'm sure with continued therapy with Deb the Magician and you and Susan and the army praying for you all, we'll be hearing of even more improvements down the road! Keeping you all in prayer.

WE keep you all in prayer...