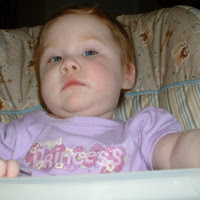 Ali's optometrist says that Ali has mild optic atrophy. The doctor arrived at this conclusion using equipment that revealed that Ali has a pale optic nerve. Like most normal people, I don't really understand what this means so I have to Google things on the Internet to become somewhat knowledgeable about this stuff. Apparently, it's not the end of the world. In fact, the doctor said that most of the time, this isn't picked up on until a kid is eight to ten years old and has some trouble in school. Knowing this early will permit us to begin teaching her early to maximize the vision she has. I take some comfort in knowing that for the past twenty years, I drove among many who were legally blind yet issued a driver's license in South Florida. 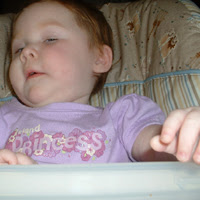 Damage from shaken baby syndrome is far reaching. Every single day I think about what happened to Ali and I'm moved with emotion that I have difficulty processing. It's not fair. Ali's just a baby. I feel like I should be more grown up about this, but with Ali being hurt, Susan and I having to move over three thousand miles, leaving my friends in Florida, and watching my family get separated, Ive been reduced to tears and disbelief and often questioning God. I've said it before: I don't have enough of a theological grip on the way things work to answer all the questions that come to mind. This is not the life I picked. 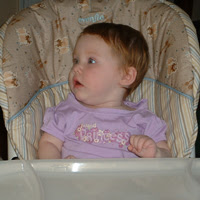 But, then, we don't get to pick, do we? We like to think we're in charge of our destinies, but are we? The bottom line is I've given my life away. When I trusted Christ with my life, future and eternity, I gave it all to Him. So I know He'll strengthen me and give me the wisdom I need to live it honorably before Him. 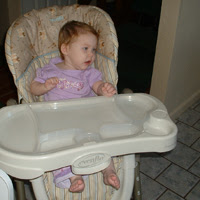 So many lives around us have been changed by what's happened to Ali. And I don't expect that the impact her little life has had is in vain. Diagnosis or no diagnosis, this is the beginning of an amazing story with Ali as the lead character.

Bryon,
I continue to pray for Ali and for your family. God bless and strengthen you, brother.

Nice pic of Ali in high chair, what a lot of people don't know how hard it is for her to sit in it, how her body isn't as flexible as we see it in the pic, how every moment of the day you and Susan spend so much time to exercise those muscles, I was blessed to see her daily routine and I really don't know how you both do it, but what I do know, is the love you both pour into her is amazing. In Christ all things are possible!

What God accomplishes through Ali will be far reaching too. I know you would trade places with her in a heartbeat. Nothing good, honorable and worthy of repeating is coming to mind as I gaze into that sweet face and consider all that she endured. It is heartbreaking and mind boggling.
I remember now in this moment, though, something I read on a Caring Bridge site that IS worth repeating. It was on the site for Daniel Cleburne Reeves.
~written by his mom~
I am encouraged by the words of Hebrews 12:2, “Looking unto Jesus the author and finisher of our faith; who for the joy that was set before Him endured the cross, despising the shame, and is set down at the right hand of the throne of God.” I have never known anyone to go blind by looking on the bright side of things, so I’m fixing my gaze on the Son.


Prayers for all of your family are on our hearts and lips frequently as we go about our life. Thank you for the update and for always sharing your heart.

thanks, you all, for the encouraging words and the prayers...

I'm so sorry to read about this diagnosis, but I'm not surprised. Still, I had wondered if she might be totally blind, and she isn't, so praise God for that!

In the past few years, the phrase "Looking unto Jesus..." has come to mind so often, when I was looking in some hurtful direction--like, for instance, a past hurt. Jesus...the Light of the World...the author and finisher of my faith...the one who loves the little children so much...Jesus.

I wish I could think of something profound to say, but having failed, I'll shut up. God bless you all: Ali, Susan, you, Charity...

This is not the life Ali picked, either, but thank God --- He picked the two of you to live your 'not the life I picked' lives together! :)

I keep reading and thanking God that if Ali HAD to go through this, that she was given grandparents like you and Susan.

-Just a lurker you don't know (from up-and-over in Canada).

I am so sorry...the diagnosis must have come as a blow. I know Jesus will take it on the chin for you. You and Susan are incredible. My prayer is that God will answer all your prayers for Ali.

All About Jesus,
Jan Arant

I been following Ali's Story and I am very very moved with her. God will help you go thru this.
Please see the link that I'm sending you. I just want to encourage you. I am going thru very difficult times and this video inspire me to pressing on.
May God be always with you, Susan, Ali and all your family. May you feel His presence in every step of the way, even when He seems to be absent, He is there.
May He be glorified.
Ali has a lot of people that loves her and prays for her, including me, and I don't even know you guys.

God will do amazing things in all of you as a family you will see! Often times we do not understand God's ways but we do not have to we just have to trust in Him that is the most difficult part of FAITH when things like you all are going through happen but he has a purpose and it will glorified Him! We keep on praying for you and touch by everything that you are going through.

praying for you all.