Gary emailed me this joke... 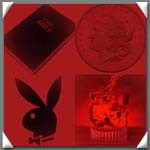 An old country preacher had a teenage son, and it was getting time the boy should give some thought to choosing a profession. Like many young men, the boy didn't really know what he wanted to do, and he didn't seem too concerned about it.

One day, while the boy was away at school, his father decided to try an experiment. He went into the boy's room and placed on his study table four objects: a Bible, - a silver dollar, - a bottle of whisky and - a Playboy magazine.

"I'll just hide behind the door," the old preacher said to himself, "when he comes home from school this afternoon, I'll see which object he picks up.

The old man waited anxiously, and soon heard his son's footsteps as he entered the house whistling and headed for his room. The boy tossed his books on the bed, and as he turned to leave the room he spotted the objects on the table. With curiosity in his eye, he walked over to inspect them.

Finally, he picked up the Bible and placed it under his arm. He picked up the silver dollar and dropped it into his pocket. He then uncorked the bottle and took a big drink while he admired this month's Centerfold.