I can't believe how hard these guys are working. I think I hear the Rocky theme song playing in the background. The physical therapist is coming in giving Ali a work-out and training Susan to care for Ali(bring up the volume on the Rocky theme music). Ali is flexing her muscles and trying to suck her thumb. The doctors are meeting with a view toward releasing Ali. What's the next step? Having the grandmother here has moved the healing into hyper-speed. Ali's healing is super-nuturally super-charged by a move of God and the fervent prayers of hundreds of saints, seen and unseen, known and unknown, praying in prayer groups and prayer closets. (cut to Sylvester Stallone running up those stairs taking three and four steps at a time). The physical therapist and Susan, together, sit Ali up and Ali moves her head, hands and feet (now Rocky is dancing the dance of boxers at the top of those stairs, both hands raised in the air, a champion). 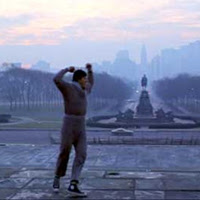 Ali is the champion. The charming and beautiful Susan is her coach pushing Ali hard toward victory. Ali cries, but it's good for her lungs and brain and muscles. Ali is pulling out of this and we're inspired; we're seeing the fruit of our prayers. Our faith grows.

So here's why we're praying:

And then Charity hung up the phone. That was three am, here in Florida, Sunday morning, a little over two weeks ago. Midnight out in California where they live. Charity worked late and she was hanging out with a friend when Ali's father called her from the back of an ambulance to tell her to meet them at the hospital. When they got to the hospital, the emergency room doctor was at a loss about why the baby wasn't breathing. She asked if the baby had been abused, and Ali's father broke down and confessed that he shook her and squeezed to get her to stop crying. She stopped breathing, instead.

She had a broken collar bone, broken ribs, and a what looks like a broken leg. These were old injuries; ones that had been healing awhile. This had been happening since January while Charity was at work.

If you're like me, you're having a hard time taking this in. Maybe you read the above paragraphs two or three times before getting to this one. My brain refused to process this information.

We have this paper shreddder at our office. It gobbles the paper down no problem one or two sheets at a time. If you put four or five sheets in, it groans and slows down. Feed it a stack of twenty-five sheets, the shredder slows down, graons loud, and stops. It jams. That's what my brain felt like as I took in this report and was faced with the sight of my little baby granddaughter under heating lamps with a machine breathing for her.

That seems like forever ago. But only two, short weeks have gone by and we've witnessed the miraculous. God is at work at every level. Doctors, nurses, social workers, cops, grandmas and grandpas, family, and the church body.

God is at work at every level.
Posted by Bryonm at 6:14 AM

God is so faithful. I praise Him for everything He is doing to restore Ali. Her quick improvement is nothing short of a miracle. We will continue to pray for a complete recovery and hope she can come home soon.
-Penny

oh my...
i pray that the Lord will provide incredible justice and healing, friend...
My heart is full for you.
love,
jeremy

I am rejoicing with you in continued prayer.
Love you guys,
Justine

Praying for you & yours, bro.

My family went through something hauntingly similar two years ago. My very young (only a few months old) nephew was sent to the hospital because of a badly broken arm. When examined, it turned out he had over fourteen discrete fractures in various stages of healing.

My lovely and gracious wife spent several months out in Colorado ministering to family as a result, and we came very close to adopting the little guy (eventually, it was the foster family who won that honor).

I completely relate to the paper-jam analogy.

I am so sorry to hear this, my heart is breaking over this news. I pray for God to show you grace and mercy and to allow that to flow through you. I also continue to pray for little Ali. May God's love and compassion fill you at this time. May His healing continue to be miraculous and perfect and just in time as are all his blessings and gifts.

God is so good and faithful - what a miracle little Ali is. Love the way He's using Grandma in all of this!
I am sorry to hear how this happened and pray that God will give all of you all the grace you need to get through this. I'll continue to pray for you, Susan, Charity and Ali ... and Ali's father.
~Mary Ellen Meyer

I could hear the Rocky theme music in my head..... your words continue to bring us to tears and cheers for sweet Ali.
We will also be in prayer for healing that goes beyond the physical realm... for all of you. We will pray you continue to walk this out in God's strength, wisdom and power. You and the beautiful and charming Susan have been an inspiration. Clearly you are leaning on your Lord.
Jody and Thom

Nearly speechless, here. I'm wondering how people who experience these things and don't know the Lord ever get through the darkness.

Praise God for who He is, for His healing power, and for bringing this pattern of abuse to light before Ali was killed. You know He will continue to be with all of you. He must have something incredible for Ali to do in her life...as if recovering isn't incredible enough.

We thank God for Ali's great progress toward complete recovery, and continue to pray for her and you all while up here in Orlando. We love you guys.

Even though you dont know us,
and our family does not know you,

We have been joining in praying for your little Ali, and are so thankful to God for her journey in recovery.

We will continue to pray for complete healing not only for Ali,
but for all in the family,

Through prayer and the power of the Lords Spirit, may there be repentance, restoration, healing, and a turn for the best for His Glory.

May God continue to carry you all in His great Love...

wow...that's heavy.
We are saddened by this news however uplifted by the fact that Ali is making good progress...God's hand is on her as well as your family. We will continue to pray for her recovery.

Oh my God Bryan! I am weeping. I am SO SO Glad this precious baby is alive! You guys hang in there. I have been praying for Ali and I will continue too.

Bryon,
i am so sorry to hear of all that you and your family have been going thru.
I'm only 3 hours from SF, if there is anything i could do to help, i really don't mind making a jaunt up the coast to do so.

Please let me know...i mean anything, meals, coffee, someone to talk with whatever, please say the word and im there.
bryan stupar