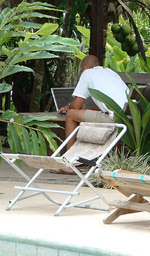 Norm and I arrived here in Puerto Viejo safe and sound. The trip between San Jose, where we landed and here is amazingly scenic. Amy and the girls welcomed us with open arms and hot bowls of a local fish stew whose name I can't pronounce but it has to do with "all the stuff you is included that you find dead on the road." But in Spanish, it sounds much more appetizing.

The city water here has been cut on and off lately due to drought. The Cruces had water all day up until the moment of our arrival. Poor Amy was left with a pile of dishes her guests dirtied and no way to wash them. Girls hate that.

The place Barrett set us to stay is a group of cabins, like bungalows. All shiny wood, ceiling fans, porch with a standard issue hammock, and mosquito netting. How tropical is that? 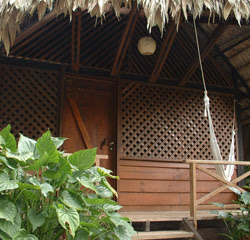 I was terrorized the first part of the night by a mosquito. I'm like a mosquito magnet. It was like a stealth mosquito. I couldn't hear it, but I felt every one of it's air assaults on my life. I retreated to the cover of my mosquito net. But somehow the mosquito, the sneak, was trapped in the netting with me. We were locked in a wrestling match to death. Only one of us was going to live through the night.

I let him come to me. And when he was good fat, slowed down by the weight of my blood, I struck the death-dealing blow.

I emerged from that net the victor; the sheets stained with my blood.

Since we're two hours behind our normal time zone, our bodies were letting us know that we were way past due for our coffee fix. Suffering in the mission field can be like that. We lack the normal comforts of home. Thank goodness the hotel had a batch of my beloved black brew ready in the lobby. I decided not say anything about my coffee jones to our missionary hosts.

Running water always seems to be available in tourists accommodations. It's those that actually live here, like locals and missionaries, that tend to go without. But they go without while smiling. Go figure.

Welcome to Puerto Viejo. I hope you enjoy your stay with us.

i actually stayed a week in puerto viejo about 6 years back, i stayed at a "hotel" called, casa de papito, puerto viejo is a beautiful little town!

You didn't bring your French press?!?

NO! Can you believe it?

Good blog entry! I like the bit about emerging the victor from the mosquito net; the sheets stained with your blood!

I shared it with the Puerto Viejo community and travellers on the Blogs and Photos page at Puerto Viejo Satellite.