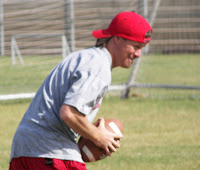 Thursday and Friday are the weekend in the Muslim world. Our team made ourselves useful by organizing games for the workers’ children. Ed and Wes did this earlier this week and this time we all had the chance to hang out and play sports with these Third Culture Kids.

Third Culture Kids, that is the children of western ex-pats in a foreign country, are less similar to our kids who grow up in the west than you might think. Even though they look and talk like the little ones that live on your block, they have more in common with the children of the natives. It’s not necessarily a bad thing, but it was our goal to treat them and play with them like the kids back home. Sometimes “suffering for Jesus” just means you’re serving parents by playing with their kids. For parents raising kids in a difficult place like this, that goes a long way.

Friday is the Muslim Sabbath. That is the day the western workers from all around the city gather for worship. In this country, it is assumed that westerners are Christians. So, contrary to popular belief, they are permitted to gather among themselves for worship, prayer, the Lord’s Supper, fellowship, and Bible teaching. For me personally, that is one of the highlights of the Middle East trip. At home, I am prone to forget how absolutely crucial it is for the Body to gather together regularly to draw strength from one another as the Spirit moves through the assembly of saints. It’s essential for us at home. And in this foreign field, it’s as vital as oxygen.

The remainder of our Sabbath day was spent relaxing with a worker here from our home city named Frank. Frank is an American student here learning Arabic as he prepares to work here long term. Frank has been here a little over a year and has a reputation in this town as a man of God and a man that loves the locals. Not only is he learning Arabic from books in a classroom, but he is learning it on the street and is able to move and converse freely throughout the city. Many doors of opportunity have been opened to him to share Good News at every level of this city’s social structure.

Our team visited Frank in his home to bring him little pieces of Americana and to encourage him as he lives his life here very far away from family and friends. But I think our team left his house much more blessed by him than he by us. He served us an amazing meal and blessed us with testimony of all the ways our Father has used Frank during his stay here.

It always seems to work out that way; you go out to be a blessing but end up being the one most blessed.
Posted by Bryonm at 2:56 AM