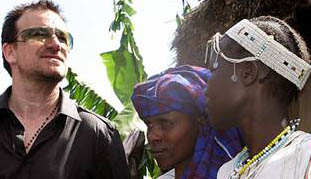 Rick Meigs over on the Blind Beggar blog linked to this Newsweek article called "A New Social Gospel".

Nov. 13, 2006 issue - During my time in the White House, the most intense and urgent evangelical activism I saw did not come on the expected values issues—though abortion and the traditional family weren't ignored—but on genocide, global AIDS and human trafficking. The most common request I received was, "We need to meet with the president on Sudan"—not on gay marriage. This reflects a head-snapping generational change among evangelicals, from leaders like Falwell and Robertson to Rick Warren, focused on fighting poverty and AIDS in Africa, and Gary Haugen, confronting rape and sexual slavery in the developing world. Since leaving government, I've asked young evangelicals on campuses from Wheaton to Harvard who they view as their model of Christian activism. Their answer is nearly unanimous: Bono.

(read the whole article)
Posted by Bryonm at 9:41 AM

Don't you just love phases like "a head-snapping generational change."

Definitely. You'll probably see that phrase or a variation of it in a future post. Somehow I'll make it look like I wrote it.

It would be difficult to come up with a better example of Christian activism than Bono, IMO. Not that he's doing it alone, of course; not even Compassion has that kind of distinction.