I met Ed in Sudan. We were both there working with Far Reaching Ministries on different projects. Ed was taking pictures for an article about the ministry and it's leader, Wes Bentley, for Calvary Chapel Magazine. Compean photographed and wrote about the work FRM was doing in Kenya, Uganda, and Sudan. I was teaching at a Bible school that trained chaplains in South Sudan and Ed was there to photograph the graduation ceremony for the next class of chaplains.

Vocationally, Ed was a photographer for a Scripps newspaper based in Southern California. Scripps sent Ed all over the world to get action shots for developing news stories. He spent time in Bosnia during that conflict was hot.

When I went off to serve in the mission field, Ed had become the director of the missions training school in Mexico where I learned (and unlearned) about serving God and making him known in the foreign field. After I came out of the field and went back on staff at my home church in Florida, Ed received and organized youth teams from our church and facilitated an amazing missions experience for our crew in La Gloria, Mexico. 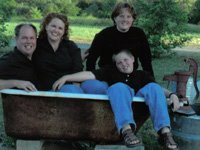 Ed's mantra is "to make God and His glory known to the ends of the earth." But he doesn't just say it; he's doing it. Ed, his wife Kelli, his daughter, Haley, and son, Jackson have packed up their trash and moved to East Africa. Ed planted a church in Nairobi, Kenya, and is exploring ministry in Nairobi's slums and among the marginalized Samburu people.

The Compean's ministry to Kenya is worth getting behind. Give to their ministry by clicking this link. Also, make sure you pray for Ed, Kelli, Haley, and Jackson.
Posted by Bryonm at 7:37 AM