Bono and the Bible 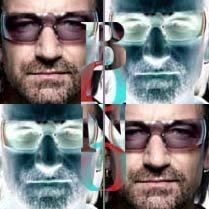 The following is my best attempt to transcribe Bono's comments about the Bible's influence on his music and his life. My feeble attempt at this blunts the impact of actually listening to the live, unscripted interview... Give it a listen.

Wenner: Two more questions on songs: the Bible we've talked about alot. How big of an influence is the Bible on your song writing? How much do you draw on it's imagery, it's ideas?
Bono: Um...
Wenner: Is it always in the back of your... your intellectual bank of images? Something you study alot...?
Bono: Yeah...
Wenner: ...comes out all the time?
Bono: Yeah, it... it... it sustains me.
Wenner: As a belief or as a literary...
Bono: As a belief. Um... You know, I'm just the sort of character... I've got to stay around the... I've got to have an anchor. I want to be around immovable objects. You know... because I want to build my house on a rock. Um... because, even if, you know, the waters are not high around me, I'm going to bring back a storm. It's like, I have that in me. So, it's just sort of underpinning for me. And it just seems to... again there's a Hebrew word, I think it's Rhema where I don't read it, as a... a historical book; or I don't read as, "oh, that's good advice." I sort of... I let it... I let it speak to me in other ways. The rhema... it's a hard word to describe; to translate. But it's sort of means it changes you in the moment you're in. It seems to do that for me. These are hard subjects to talk about, as you know, because they can sound like such a...
Wenner: You're saying it's a living thing.
Bono: Yeah.
Wenner: And because of that, then the words are always present with you?
Bono: Yeah...
Wenner: ...the words are always there with you?
Bono: Yeah, I think so. I mean it's just there to...
Wenner: Everything is shot through with it?
Bono: I go back to it, you know, and I... It's a plumbline for me. ...the Scriptures are self-described as a clear pool that you can see yourself in; that you actually get to see yourself where you're at. And, I'm writing a poem at the moment called the Pilgrim and His Lack of Progress.
Wenner: (chuckles)
Bono: So I'm not sure, but at least I know how far off I am. And when I go back to it...
Wenner: So what are your favorite...?
Bono: The poetry... the love songs... if you're just talking about the Scriptures, you know, the Song of Solomon you're talking about the great lines or aphorisms. I love aphorisms. Proverbs; I love that. The sounds of David; they're the Blues. You know? So yes, there's a big influence.
Posted by Bryonm at 8:58 PM

Based solely on your transcript, which you indicated was the best you were able to do, I get the impression that Wenner was both asking the questions and providing most of the answers. Kinda like leading the witness.

I don't know enough about Bono, and I know nothing about his music, to argue with you about his intelligence. I'm only sharing the impression I get from your post.

Yeah... It's hard to get a feel for the interview with just this snippet. I highly recommend listening to the whole interview if you're a U2 fan...

It is interesting that a reporter from Rolling Stone came up with, "You're saying it is a living thing." That's a leap most non-Christians (I'm assuming about the reporter) aren't able to make.

Interesting post. I loved U2's early stuff. Now, I can't think of a song of theirs I enjoyed since Joshua Tree.
I don't envy you trying to transcribe that interview.