an·ti·cli·max: n. A decline viewed in disappointing contrast with a previous rise.

Tropical Storm Ernesto has turned out to be a bit of a dud. I'm a bit disappointed. But at least I can say "I told you so ."

Ernie reminds me of why I go into denial about hurricane 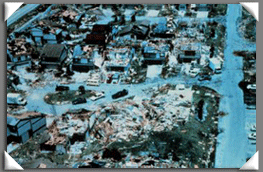 predictions and the hype that follows. The years between Hurricane Andrew (August 1992) and the previous two hurricane seasons (2004 & 2005) I prepared for hurricanes that always blew off into another direction. In July of 2004, we bought a house in Stuart, FL, that, I'm convinced, is a hurricane magnet. We've been in the direct line of South Florida's last three hurricanes. And Ernie's path is just a little to the west of where I reside.

Since I'm a little frustrated with Ernesto's delivery, I'm taking it out on my kids and making them stay home. Just spreading the love.
Posted by Bryonm at 10:21 AM

I am from Okeechobee, much of my family still lives there and they too think they are Hurricane Magnets.