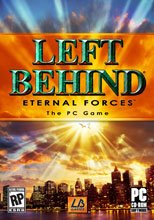 I'm an admitted skeptic/cynic when it comes to selling stuff in Jesus name. I clipped the following paragraph from a Bend, OR, online op-ed article. I bolded and italicized a line in the article; a quote that weirds me out:

And now, there are Christian-oriented video games: In early May, at the annual Electronic Entertainment Expo in Los Angeles, "Left Behind: Eternal Forces," made its video game debut. The game "features plenty of biblical smiting, albeit with high-tech weaponry as players battle the forces of the Antichrist in a smoldering world approaching Armageddon," the Los Angeles Times reported. The game is based on the best selling series of apocalyptic novels of the same name, written by Jerry Jenkins, and conceived of the Rev. Tim LaHaye, a longtime Religious right leader.

"'Left Behind' has the Antichrist, the end of the world, the apocalypse," said co-creator Jeffrey S. Frichner. "It's got all the Christian stuff, and it's still got all the cool stuff."

"The reason that I think this game has a chance is that it's not particularly preachy," said Michael Pachter, an analyst at Wedbush Morgan Securities. "I will say some of the dialogue is pretty lame -- people saying, 'Praise the Lord' after they blow away the bad guys. I think they're overdoing it a bit. But the message is OK."

"We hope teenagers like the game," LaHaye commented. "Our real goal is to have no one left behind."

I have to admit that I've never read any of LaHaye's Left Behind books (although I have read - and highly recommend - several of the books he co-authored with his wife, Beverly, on marriage and family), this video game thing has me trippin'. Is it just because I was never any good at video games or something else? Any thoughts?
Posted by Bryonm at 6:36 AM

i read the books, they're pretty good, i just don't know about blowing away somebody and then saying, "praise the Lord"

I'm not sure about calling all that stuff "Christian," either, but maybe it's just me.

You call yourself a skeptic/cynic about selling stuff in Jesus' name. I read a book, a couple of years ago, and then sent it to my mom. I suspect she put it in the library where she lives. Anyway, I'm not sure this was the title, but the book asked such questions as, "Would Jesus spend his time on this?" and "Would Jesus spend his money on this?" I'm not positive about that last one, but I think it was there.

He did point at Christian book-'n'-stuff sellers who load up counters, shelves and wall space with stuff--little stuff, cute stuff, just stuff--all designed (let's hear it from the skeptics/cynics) to make a buck. And do we need all those things??

Sorry to pontificate so much, but when I have to push so hard for a little counter space for a small brochure display (no room for child packets!) in hopes that someone will sponsor a child, because they have all this stuff they're trying to sell . . . I get a little annoyed.

I've read them and I'd say they are pretty good for the "Christian" marketplace (a pet peeve of mine is the poor quality of Christian art, literature, music, etc. that is embraced just because it has a Christian theme). In otherwords, if there wasn't this built in audience I don't think they would have been published let alone widely read. More power to someone who can sell that many books, but they aren't great or even good by the standards of non-Christian work.

As for the game it's hard to believe that anyone thinks this is going to bring people to the Lord; it looks like it is all about the money to me. I don't have a problem with that except when you push people away from God to do it, and I think that is the result of this.