Do You Feel Let Down?

Christianity Today in its Weblog section posed this question about 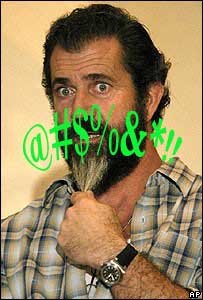 “Do those church and ministry leaders who so vociferously defended Gibson against charges of anti-Semitism during The Passion controversy now feel burned?”

And I’ve been dying to ask this question (but I tend to keep politics out of my blog unless I can have some fun with it): 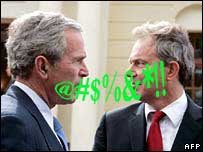 you let down by George W. Bush now that there a handful of recordings of Bush’s potty-mouth?

My opinion is that we make too much of guys that act like you and me. When I’m in the work place and claim to be a Christian, then turn around and treat my co-worker badly, I get held to a different standard than the guy that doesn’t make loud, possibly obnoxious, public statements about his faith.

When Gibson’s movie was pre-screened and endorsed by pastors as an end-times tool for evangelism, Gibson was placed a couple of rungs higher on our moral ladder than he probably wanted.

When Bush said during his campaign for president that his greatest hero was Jesus Christ, we didn’t expect him to cuss “off microphone” in Tony Blair’s ear. We looked for him to share a Four Spiritual Laws gospel tract with the Prime Minister. That’s what all good evangelicals do off mic.

A couple of thoughts about Mel Gibson:

I have never heard or read a better public apology than the one crafted by Gibson. If only Bill Clinton would have had that kind strength of character. That is definitely a good first step toward making public repairs of the damage done so openly.

And when it comes to his movie The Passion: a guy in our church congregation asked me if we were gong to rent a movie theater on opening night to boost ticket sales of the “Greatest Christian Movie in Human History,” I said that I was going to wait for the video. I thought the guy was going to punch me right there in Starbucks.

Anyway, any thoughts regarding the above questions?
Posted by Bryonm at 7:41 PM

I can't help but feel that these are "black eyes" for us. Especially in the Muslim world, where most nonbelievers "know how to act". However, everybody is a sinner, all this proves is that these "powerfull" and famous Christians also need God's grace.