I’ve resigned. Given in. I can’t quit. Won’t quit. I love it too much.

I’m talkin’ ‘bout a coffee jones. I’ve tried to walk away from that seductive, sultry, dark, hot juice of the bean, but like a sailor to the siren, I’m drawn back. 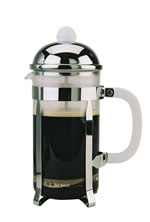 For me, it’s he ritual; it’s the toys. The paraphernalia. My morning starts with five small scoops of whole beans freshly ground. My brother the chef says coffee needs to be grind for thirteen seconds to be right for the French press. The French press is the most vital piece of paraphernalia in this ritual. In a French press hot water and freshly ground beans are poured together into a pitcher and then strained by pushing the mixture through a screen that fits the pitcher perfectly. Grounds end up on the bottom of the pitcher, and wonderful, piping hot coffee is poured into a favorite mug.

My brother, Dan the chef, bought me my first French press in 1996. I replaced it about two years ago and that French press kept through three hurricanes. Beans were ground by car battery and water heated on my barbeque. The beet goes on.

this post inspired me to brake out my french press, and it was well worth it my friend, well worth it. I can't quit and more than that I won't quit.