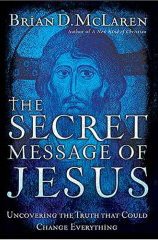 Two thirds of The Secret Message of Jesus I liked – no – I loved. The last third, well I was a little lost, like wondering what he was trying to say, and I think I got a little cynical.

This guy is smart and an excellent and interesting writer; really worth reading. I know that he’s a lightening rod for controversy – although, I think he invites it just to get some dialogue going – being one of the daddies of the Emerging Church situation.

If he wasn’t part of that movement (or “conversation” as they like to call it) I think he would be more accepted, but probably not as widely read.

The thing that McLaren has challenged me to do is weigh my theology and politics on the scales of Jesus’ teachings and His life. I appreciate McLaren and his “emergent conversation” for this. In fact, I’m studying the gospels like I haven’t in years.

And he challenges the idea of the conservative Christians and Republican Party being a marriage made in heaven. That’s refreshing as long as the Democrat party isn’t the mistress on the side waiting for a divorce (this is where the cynic in me comes out).

Where McLaren and I definitely part ways is in chapter 19, The Future of the Kingdom. It is in this chapter that the author states, “In our view, God intended to create our universe the way parents give birth to a child: the child is given limits and guidance, but she also has freedom to live her own life. That means that our future is not determined as if it were a movie that’s already been filmed and is just being shown to us.” To be fair, McLaren doesn’t go as far as to say that God doesn’t know the future. He doesn’t say that. But he says the future isn’t determined.

But – and feel free to help me out – didn’t Jesus say, “Heaven and earth will pass away, but My words will by no means pass away.” [Mark 13:31] Not to mention all of these verses about the fulfillment of God’s Word:

Not to mention the Book of Daniel.

Not to mention the over three hundred prophesies of Christ’s first coming and Jesus’ fulfillment of them in the New Testament.

McLaren ascribes an allegorical interpretation to the book of Revelation because there were numerous apocalyptic writings at the time. The only thing is that is doesn’t begin as apocalyptic writing, it begins as a narrative where John says in Revelation 1:3 “Blessed is he who reads and those who hear the words of this prophecy and keep those things that are written in it; for the time is near.” John also goes on to give his location and the things that the Lord had shown him, things that are difficult to relate in the words John currently had in his vocabulary.

I love that McLaren wants the church to literally follow Jesus’ example and literally obey His words and I would challenge him to take as literally as humanly possible the rest of the Message of Jesus in the book of Revelation.

McLaren says he wrote this book for a mostly non-believing audience. Personally, I would not recommend this book to non-believer. If I couldn’t get the non-believer to read the Bible, then I would recommend something from Greg Laurie or Philip Yancey or C.S. Lewis.
Posted by Bryonm at 8:08 PM

Dude, don't you think he's making the point that God's foreknowledge of the future doesn't equate to a robotic unfolding of the future? It’s the classic question:

"If God already knows the future, then how can we have free will?"

I don't think our human minds can grasp the concept that we have free will AND God knows what choices we will make with our free will.

And the choices we make, with our free will, will eventually cause us to play out every prophecy that has ever come from the Lord. It's trippy, I know. That's why He's God.