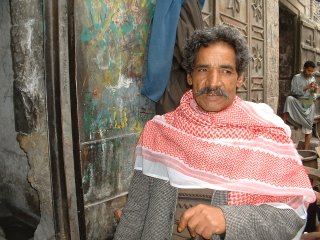 You will be relieved, as was I, to know that my fears of going without were not realized here. Good coffee, indeed, exquisite Yemeni coffee, freely flows here at Fred’s flat.

As you know, we ran into our first snag at the Atlanta airport. Our group made its way to the Frankfort, Germany departure gate when one of our number discovered her passport missing. By the time we made it back to the gate of the plane that brought us to Atlanta, it was already loaded back up and en route to Florida. Six weeks of meetings and training that forged our group into friends suddenly seemed wasted. The euphoria of group travel to far off places instantly vanished as were sobered by leaving one from our team in Atlanta.

That set back was short lived as we joined the group from Chattanooga and boarded the plane that carried us on the trans-Atlantic leg of the trip. In the midst of introductions and reunions of mid-east outreach veterans, we quickly forgot that we were one light. The group’s size had doubled and the Chattanooga team never knew the difference anyway.

Our arrival in the Middle East went smoothly. The airport was not nearly as hectic as the first few times I’ve been here. We had prepared our team for much more chaos than was delivered. It was sort of anti-climatic, although we did come up two bags short. And we had the pandemonium of traffic and the bedlam of the Old City to look forward to on the next day. That cheery thought buoyed my spirits.

Our accommodations the first two days were spectacular. Kudos to Bob and James for hosting our arrival. Our time in the capitol and in the Old City was amazing. The experience was as new and exciting for the vets as it was for first-timers. The commotion and disorder in al souk was enough to make it really interesting but not terribly disorienting. The salta meal we enjoyed together in a four hundred year old house was incredible. The new flavors and way of eating were enjoyably consistent with the rest of the strange and brilliant sights and smells of the Old City.

We were all excited as we prepared to head in our different directions. The team heading to Fred’s city piled into the Land cruiser driven by Ronald shortly after an Arab style breakfast. The trip took five hours. But it also was filled with new and spectacular sights as we traveled past ruins of castles built atop high mountains that commanded a spectacular view of farm-filled valleys and dry river beds below.

We ate lunch at a small village tucked in one of these mountain passes.
Yesterday was our first full day in Frank’s city, a place that provides the country with most of its educators and business people. It is here where our team will conduct English cafes with Arab speakers learning English. We spent the morning worshiping together and having communion with other workers here from Europe, South Africa, New Zealand, Asia, and America. The ladies on our team will have dinner with some worker ladies tonight.

Today was a day of introduction of our team to the students and teachers we’ll be serving with the English cafes. We have been received warmly and the team is, quite frankly, a little nervous about our ability to meet expectations here. If it goes at all like our visits with locals yesterday, it will be great. Those with any kind of English ability have engaged us in conversation revolving around everything from our impressions of their country to our Christian beliefs. They want to know everything about us as well as test the limits of their English speaking skills. I’m confident that the time before us will be incredibly productive for everyone involved.

The reason I’ve had time to write such an epistle is I’ve been dispatched by Fred to wait for a plumber here at the flat while Fred is in class. I’m here now with a plumber that knows as much English as I know Arabic which isn’t much. A crash course in Arabic has been prepared for my team. We’ll spend the first hour of every day learning the language. That’s where my teammates are as I’m filing this report.

Day after tomorrow Ronald and I will go pick up the team member we left in Atlanta. A new passport and visa were expeditiously issued over the past few days and she will rejoin our team. We’re all excited about that and graciously thanking our Father for going before us and making all the arrangements. Please join us in asking for continued favor. 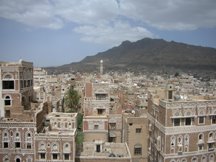 Was the plumber there because of what you or one of your team mates did? :)

BTW that a sweet picture.

Dude:
There were six of us using one potty. There was a day when all of us were having tummy troubles at the same time and toilet paper became scarce because it was all down the tubes. But the plumbing appointment didn't have anything to do with that...

Sweet, I've traveled a little throughout the middle east so I know exactly what you're talking about. For the most part, they get a bad rap huh, a few bad apples spoils the nice bunch.

It was great to have you here! Good to read your stories! I will be in touch!
Robert