I found the following posted on David and Lara's blog who found it on Blonde Sagacity blog. Good stuff. These students have a future.... 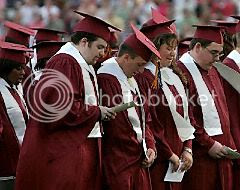 Tenesee's Munford High School had always started and ended their graduation with a student-lead prayer --that is until the ACLU told them they couldn't.

Now the principal just asks the students for a "moment of silence" to "reflect on what makes the day special". But, this year the students wouldn't be silent...

" Most of the audience stood, bowing their heads. Then, most of the 286 graduating seniors pulled out laminated bookmarks and folded up pieces of paper that they had been given earlier and began reciting "The Lord's Prayer." Students said beforehand that they knew that the moment of silence would be their chance to speak.

Once those in the audience realized what the students were doing, they broke into wild cheering as the silence in the football stadium was broken by the verses of the prayer.

"Please be seated," Marshall told the crowd. "We appreciate the community's support." (source)

ACLU executive director Hedy Weinberg of Nashville could not be reached for comment after the graduation.

"The "Tennessee Student Religious Liberty Act of 1997" says in part, a student shall be permitted to voluntarily: (1) Pray in a public school, vocally or silently, alone or with other students to the same extent and under the same circumstances as a student is permitted to vocally or silently reflect, meditate or speak on non-religious matters alone or with other students in such public school."
Posted by Bryonm at 5:52 AM