I’m still talking about the music from seventh grade. 1977. Two other albums came out that year that opened my mind to mystery and anarchy. 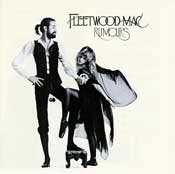 The Rumours album was amazing to me. I listened to it repeatedly. I read the words and stared at the album cover. The Chain was a mesmerizing song. But I have to confess, the artwork on the cover of that record was even more hypnotic. The image of Stevie Nicks on the LP’s cover made me feel like there wasn’t enough oxygen in the room.It was dizzying; disorienting. The picture isn’t sexual or lustful. But for me at twelve, that photo conveyed the mystery of the opposite sex the way the Song of Solomon does.

When I was nine, my father took me to the Grand Canyon. It blew my mind. I felt like I could touch it, but I better not try. It seemed like I could see the whole thing from where I stood, but I knew I needed a few lifetimes to really experience the depths of its beauty. I was standing on the edge of a cliff and one misguided step and I would plunge to my death.

That is the mystery of that picture of Stevie Nicks.

Over the top drama, I know. But I was twelve at the time so cut me some slack. Besides, that year when Fleetwood Mac accepted their award for that album, they band was three sheets to the wind. Stevie Nicks was so wasted she had to be helped to the microphone. My visions fizzled in that moment. Not to mention on January 26 - Fleetwood Mac's original lead guitarist, Peter Green, was committed to a mental hospital in England after firing a pistol at a delivery boy bringing Green his royalties check. So fades the glory.

These antics remind me of other 1977 music news: the Sex Pistols released Never Mind the Bollocks, Here's The Sex Pistols. Talk about odd. Six or seven years had to pass, along with the passing of Johnny Rotten, before I could actually begin to appreciate punk rock. And it wasn’t until the 90’s when groups like Green Day, Blink 182, and MxPx tightened punk rock up some, cleaned it up, made it a little less dismal, and more main stream.

Dude - how oculd you have ever had the hots for Stevie Nicks? Don't you dig chicks who shave under their armpits???

Besides - how could you be enthralled by her when Deborah Harry was around?

I've always thought Blondie was a little skanky. But her momma loves her.