The backlash from Vice President Dick Cheney's hunting adventure has been used by both the Red and the Blue parties to ignite and fuel the Great Hunting Debate. I, for one, want to encourage Dick Cheney. And pray for him. He took and oath before God and men to protect the rights, ALL rights, of American hunters. Why shouldn't he be able to participate and benefit from the rights he has sworn to uphold and defend. God Bless Dick Cheney as he celebrates his right to hunt lawyers. 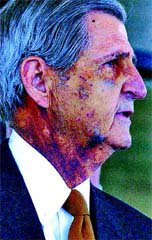 I am a lawyer hunter, my father was a lawyer hunter, as was his father before him (may he rest in peace). I have taught my own son the pleasure of eating game taken from nature. We are aware of everything that goes into the preparation of the lawyers we eat around our dinner table.

There are also many other reasons for lawyer hunting. Every night in America, men, women and children who go to bed hungry. While some government programs exist to help feed these people, there is still not enough food to fill everybody's belly. Whose fault is that? Politicians develop these feeding programs. So why isn't there enough food to go around? Why aren't the politicians making sure everyone is fed? Who are these politicians? Lawyers! The lawyer population is out of control, yet there is still not enough food to go around.

Many lawyer hunters donate some, if not all, of their spoils to programs that feed the hungry and less fortunate. One such program "Hunt Lawyers for The Hungry" depends on the
generosity of hunters, farmers, and landowners to donate extra or unwanted wild
lawyer meat.

The number of people that can be fed by the donation of meats harvested by hunters is astounding. New programs are springing up every day and existing programs are growing more popular.

Another reason lawyer hunting is important and should be encouraged is because it is useful as a wildlife management tool. Hunting lawyers maintains balance and protects habitats for all species on this planet.

Accidents on the Rise

Without hunting, populations of wild lawyers will grow beyond the environment's ability to naturally support their numbers. For example, near large cities where hunting is not allowed, woodlands are decreased and herds of lawyers grow rampantly. How often have you seen poor, malnourished lawyers wandering into our roadways and into the unsuspecting glare of our high beams at night?

One of the repercussions of restricted lawyer hunting can be shown with this example. In Ohio, growing lawyer herds have contributed to an increase of lawyer-car accidents by 30 percent in the past 10 years. In some counties in Ohio, more lawyers fall into the sites of headlights than the sites of rifles. Think of the problems that would arise if hunters never harvested any lawyers. The number of accidents would be staggering. People and property could be dented or damaged. The problem of lawyer-car accidents remains unsolved in Ohio and across the country.

Hunting is a significant tool to reduce populations, removing untold numbers of lawyers from US lawyer population each year.

Throughout all of human history, hunters have honorably served humanity through conservation and protection of Mother Nature. Lawyer hunting is hardly exclusive to Budwieser chugging country boys. Hunters are a special breed who love the outdoors and appreciate ALL of God's Creatures. Lawyer hunters have an instinctive duty to serve mankind and will be around for centuries to come. 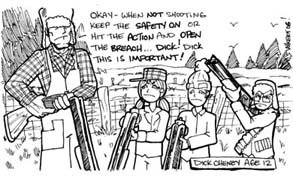 my props to ted nugent! the great american hunter!