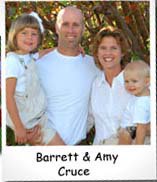 Barrett and Amy Cruce are in town on furlough. They are missionaries with Alternative Missions working in Puerto Viejo, Costa Rica. They sold all their belongings last year, quit their jobs, and moved their crew down to Costa Rica’s east coast last year to take the good news of Jesus Christ to a region that seems like paradise but is really a land of broken dreams, drugs, and endless wandering.

Barrett grew up as a preachers kid that split for the Navy as soon as he was old enough to leave home. He met Amy and married her and eventually the two of them ended up at Calvary Chapel Jupiter in 1998.

Barrett and some surfing buddies took a trip to Costa Rica about three years ago. Most surfers think of Costa Rica as heaven: summer year-round and endless waves. So many visitors from around the world drop out of their lives and try to make a new life in Costa Rica. Barrett found that their lives end up coming apart as bliss is pursued but stays just out of reach. Barrett’s heart broke and was compelled to be a vessel of the peace that can only be found in a relationship with Christ.