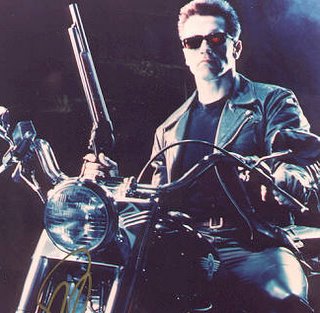 A couple of months ago I blogged a confession: my failure to comply with Florida State Law. I've gone twenty-something years and owned five motorcycles and never had the proper endorsement on my license. I did this without shame. I did, however, spend a great deal of time driving with my eye on the rear-view mirror. I was ticketed for speeding, but, mercifully, not operating a motorcycle without a license.

But that just doesn't happen when:

Check out the following article I found through the Drudge Report:

The Terminator has done it again. But this time in real life and that too as governor of California. The other day, while taking his 12-year-old son out for a spin on his Harley-Davidson, Hollywood action hero-turned-governor Arnold Schwarzenegger collided with a city attorney’s car but escaped with a bruised lip.

It was only subsequently that the fact was revealed that the California governor did not have a licence for driving the motorbike after years of taking it out on the roads and highways. “I just never really applied for it,” said Arnie. [click here to read the rest of the story]

rice burner? he probably wouldn't have made it to his destination anyway. he a couple leo's behind him just in case.