Dave Barry Year in Review: Wilma, Rita, Katrina: No matter how you stack it up, 2005 blew 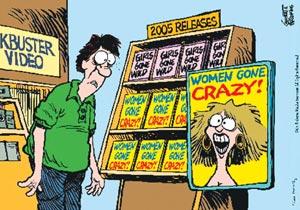 It was the Year of the Woman. But not in a good way.

Oh, I'm not saying that men did nothing stupid or despicable in 2005. Of course they did! That's why we call them ''men.''

But women are supposed to be better than men. Women are the backbone of civilization: They keep families together, nurture relationships, uphold basic standards of morality and go to the bathroom without making noise. Women traditionally shun the kinds of pointless, brutal, destructive activities that so often involve men, such as mass murder and fantasy football.

But not this year. Women got CRAZY this year. Consider some of the more disturbing stories from 2005, and look at the names connected with them: Martha Stewart. Judith Miller. Valerie Plame. Jennifer ''Runaway Bride'' Wilbanks. Paris Hilton. Greta ''All Natalee Holloway, All the Time'' Van Susteren. Harriet Miers. Katrina. Rita. Wilma. Michael Jackson.

Of course not all the alarming stories from 2005 involved women. Some of them involved men, and at least one of those men was named ''Scooter.'' I'll be honest: I don't really know who ''Scooter'' is, or what he allegedly did. He's involved in one of those Washington-D.C.-style scandals that are very, very important, but way too complicated for regular non-Beltway humans to comprehend. You try to read a Scooter story, and next thing you know, you're emerging from a coma weeks later with spiders nesting in your ears. But whatever Scooter allegedly did, it was bad. We know this because pretty much all the news this year was bad. Oh, sure, there were some positive developments. Here is a complete list:
• In some areas, the price of gasoline, much of the time, remained below $5 a gallon.
• Nobody you know caught avian flu. Yet.
• The Yankees once again failed to win the World Series.
• Cher actually ended her farewell tour.

That was it for the good news. The rest of 2005 was a steady diet of misery, horror and despair, leavened occasionally by deep anxiety. So just for fun, let's take a look back, starting with . . .