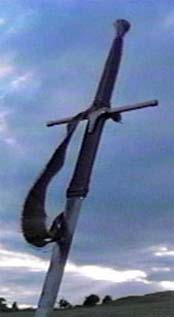 Ken Graves of Calvary Chapel Bangor walked up on stage wielding a massive two-handed sword. This weapon was a replica of the blade Scottish folk hero William Wallace (of Braveheart fame) carried into battle as he wreaked havoc against English tyranny until his enemies captured and executed him in 1305.

Ken is a “man’s man”. Every time I hear him speak, he challenges me.

Not necessarily in a good way, though. I mean, he’s a man of God and all, but does he really have to be that macho? Something in my old nature comes out when I watch him swagger on stage swinging the sword of some barbarian hero. I think to myself, you’re probably not so tough. So what if you were a lumberjack. Where? In Maine? You call those trees? Buddy, I fell timber. Yeah. That’s right, but in Northern California. You know – Redwoods. How ‘bout that. And I was in the Marines! I’m trained in the use of deadly force…

Wow! I didn’t know that was going to be such a rant. See what I mean? I just want to one up the guy. Is my own manhood so at stake that I have to over-compensate so desperately? I mean, it’s not what I want. I’m not the one twirling a sword. And if I was, it wouldn’t be the sword of some brute barbarian. I would swing the silent steel of the samurai. Now there’s a warrior for you. 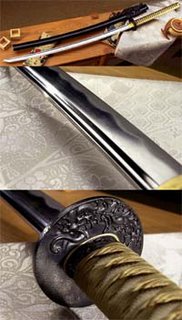 Samurai believe moral relations between master and servant, father and son, husband and wife, older and younger brother, and friend and friend. Not only that, they hold in high regard justice, benevolence, love, sincerity, honesty, self-control… Ah. Self-control. What was it I was trying to say?

Ken gave a great talk about God’s word and its double-edged nature. For every biblical truth taught, there’s another side to it: the goodness and severity of God (Romans 11:22); the two advents of Christ; first lowly on the foal of a donkey; second as the conqueror on a white horse.

“Hide or seek,” Graves said. “Seek His face or hide from it.”

Ken quoted James Stewart: Jesus is a coalescence of contrarieties.

“So how do we have balance?” Ken asked.

Balance is not hanging out in the middle.

Balance is spending time at both ends; both poles. He said the Lord was bi-polar.

He illustrated His point by describing the cleansing of the temple. Jesus turned over tables and drove out livestock with a whip. He gently handed a cage full of doves over to someone to release them harmlessly. Ken said it comes down to simple barnyard concepts. “What kind of animal is this?”

We should be consumed; driven, to serve God like the men He created us to be.

This is an absolutely freeing truth for a generation of men that has been feminized by culture and the church.

Ken is just being the Ken that God wants him to be. Ironically, he just got back from felling trees at the Calvary Chapel in Austria...but I am sure you were invited to help, right?

What makes a man a man is not what he does, but who he is. A fact that, sadly, most men in this country are not cognitive of. Ken Graves seems a manly man because he embodies the qualities of a true man. Qualities such as faithfulness, loyalty, steadfastness, and strength, as well as other excellent characteristics.