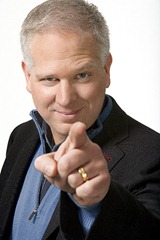 Glenn Beck gave one of the most clear and succinct presentations of the Doctrine of Salvation I’ve ever seen on television on his show last night. Go to his website to watch a video and read a summarized version of his presentation.

Glenn Beck is either ignorant, deceived, or a deceiver. Based on how he made his presentation, it’s my opinion that he is a deceiver with a goal of gathering conservative Christians into his political flock.

First, Glenn Beck unequivocally identifies himself as a Mormon. It is a well-known tactic of the Mormon proselytizers you see riding ten-speeds and knocking on doors to identify as closely with Historic Protestant Christianity as possible in order to sound like Biblical Christians. Mormons have a collective reputation for living wholesome, moral, hard working lives. These are ideals that are Biblical Christians and Mormons have in common that Mormons, as a whole, put into practice. Beck exploits this in popular media better than anybody while millions of Fox News viewers robotically nod their heads in agreement because it scratches where they itch politically. (Rupert Murdock is a genius for recruiting Beck from CNN during the election knowing that Obama was going to win. Just as Rush Limbaugh’s right-wing empire grew during the eight years of Clinton, so will the Beck/Murdock empire.)

Second, Beck, argues brilliantly. He takes a fringe (but popular) social movement within Christianity and demonizes it. Then he gives a biblically accurate presentation of personal salvation through Jesus Christ in contrast to the liberal leaning politics of the Black Liberation Theology that Barack Obama is identified with. On one hand, Beck condemns the black vs. white dualism of Black Liberation Theology while dualistically contrasting his Salvation through Jesus against James Cone’s radical religious views and politics. The funny thing about this tactic is that he introduces his talk by making making a reference to Jim Wallis, someone that believes strongly in the Christians role in promoting social justice in politics but has little in common with the theology of James Cone.

This is a disingenuous misrepresentation of Wallis’ beliefs, but plays well to Beck’s audience because they think Beck does no wrong or would not lie. What doesn’t help is that political currency buys his way into conservative schools like Liberty University and gives him the ear of Christian leaders like Richard Land. For some reason Land helps Beck make a presentation of Salvation to millions of viewer without helping Beck give a clear historic presentation of Jesus Christ.

Since Beck points out flawed theology in his presentation, it’s only fair that we examine the flaws so readily swept under the carpet by Mormonism’s founders and proponents. While an accurate explanation of salvation through Jesus Christ is given, the problem is the Mormon version of Jesus. The Jesus of the Mormon church is a fictional angelic super-being loosely based on the biblical Jesus of Nazareth. The Mormon Jesus is the fan-fiction creation of Mormon founders Joseph Smith, Brigham Young, and subsequent “prophets on earth”.

Here’s a sketch from Mormon writings of the Jesus Beck depends on his salvation for.

This extremely long blog post has been percolating for a long time; ever since Glenn Beck told anyone that goes to a church that teaches about social justice teaches Marxism. Even the leaders of the Mormon church distanced themselves from Beck for that comment. Jim Wallis does an outstanding job of explaining salvation, social justice as practiced by Jesus in the Gospels, and salvation in Jesus Christ. Political movements of social justice in this country and others have never been started by politicians; they’ve always begun in pulpits and congregations responding to prophetic teaching that challenges the status quo. Beck is neither of these. He’s an extremely opportunistic disc jockey with an agenda to establish the current political status quo as the will of this country’s founders and the will of his version of God.

video of James Cone
video of Jim Wallis
video of Glenn Beck and Mormonism
cartoon about Mormonism banned from YouTube (who has that kind of clout with Google?)
controversy of “The God Makers”

Very interesting post, Byron, thanks for spending the time putting it up!

It is appropriate for Beck to contrapose himself with James Cone, because his "theology" is cut from the same cloth as Cone (and Bob Marley.) It is also a political-contextual theology of scripture, just from the opposing political extreme.

Mormons annoy us Christians to death mainly because they seem to be superior Christians. And in a Glen Beck sort of way, maybe they are. But your article does a great job highlighting what's missing in the picture...

Unfortunately too many Christians approach Jesus the same way, as a mascot for their political-contextual religion. Jesus is absent there, too.

Thanks for your comments and insight.
B

Dude, I only have the vaguest knowledge of this Beck guy except that he is highly loved and respected. Yet I grieve. How can anyone trust a man for information when he is either he can not discern the false history his faith system relies on? How can so called conservative institutions allow him access to their masses when Beck stands in opposition to their stated mission? Okay, I'm ranting, so let me say thanks Bryon for posting this and letting us know about this guy.