I posted yesterday about Team World Vision. Check the story below about Ryan and Sara Hall. 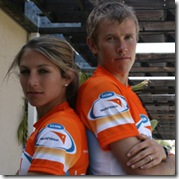 YOU CAN JOIN THEIR TEAM

A message from Ryan:
"Joining Team World Vision was an answer to our prayer. Now we have something very tangible that we are fighting for out on the track, roads, or grass: to help the sick, orphaned, and poor all over the world."

> WATCH Ryan's story
To you from Sara:

"Running accomplishments in and of themselves, even when you've reached the top, are empty without being done for a greater purpose. Team World Vision equips you as a runner with a purpose for which to train, sacrifice, and compete: the ability to change lives of African children in areas impacted by AIDS!"

I would love to see Team World Vision take off around the country. I was in a conversation recently with a woman that used to go to church with that was in a marathon in a large north eastern city. She noticed how small the Christian witness was in that race. It's not like that every where in the US, but groups like Team World Vision can definitely raise awareness for Christian causes in events that attract so much attention.