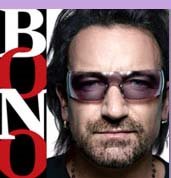 "The master commended the dishonest manager because he had acted shrewdly. For the people of this world are more shrewd in dealing with their own kind than are the people of the light." Luke 16:8

This verse baffled me. Why did Jesus speak of the dishonest manager (the New Living Translation calls him "that rascal") so well? Because "that rascal" used all his resources, was creative, and ultimately, was rewarded for making his boss look good. The downer was that Jesus said that the "people of light" don't know how to be shrewd, be creative, or build alliances the way the dishonest do.

Not so with Bono.

Rolling Stone editor Jann S. Wenner interviewed Bono and guided him through topics like AIDS in Africa, the Bush administration, Christianity, Dylan, Springsteen, the Stones, and the Scriptures.

Bono is brilliant. Many times throughout the seven part interview, Wenner played hardball with Bono over his politics and religion. His cheap shots showcased Bono's humility and ability to make his case like a poet/statesman. Bono would not allow himself to pile on with the critics of Bush and his war. And I think that Wenner was pleasantly surprised that this loud-mouthed, Irish rock star turned out to be so interesting and candid.

Fetch the Rolling Stone Interview with Bono.
Posted by Bryonm at 10:38 PM

I think like all of us, Bono is growing spiritually. Life has shown him that there is only one way, the way he has known for a long time but maybe in recent years, has really grasped.