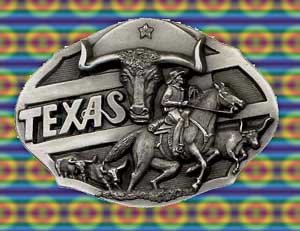 In a conversation I had with Jeff the other day, he said, "Gee, I sure miss Texas." So I'm re-posting this post from the Attic Downstairs.

Things I learned grow'n up in Texas


Armadillos sleep in the middle of the road with all four feet in the air.

Raccoons will test your melon crop, and let you know when they are ripe.

If it grows, it will stick you. If it crawls, it will bite you!

Nothing will kill a mesquite tree.

There are valid reasons some people put razor wire around their house.

A tractor is NOT an all terrain vehicle. They do get stuck.

The wind blows at 90 mph from Oct 2 till June 25; then it stops totally until October 2.

Onced and twiced are words.

When you live in the country you don't have to buy a dog. City people drop them off at your front gate in the middle of the night.

The sound of coyotes howling at night only sounds good for the first few weeks.

When a buzzard sits on the fence and stares at you, it's time to see a doctor.

There ain't no such thing as "lunch". There is only breakfast, dinner and then there's supper.

"Sweetened ice tea" is appropriate for all meals, and you start drinking it when you are two. You also give it to babies for colic..Just a tid-bit.

"Backwards and forwards" means I know everything about you.

"Jeet?" is actually a phrase meaning, "Did you eat?"

You don't have to wear a watch because it doesn't matter what time it is. You work until you're done, or it's too dark to see.

You measure distance in minutes or hours.

Stores don't have bags. They have sacks.

You see cars with the engine running in the Wal-mart parking lot with no one in them, no matter what time of the year.

All the festivals across the state are named after a fruit or a
vegetable.

You install security lights on your house and garage, and leave both unlocked.

You carry jumper cables for your own car.

You know what "cow tipping" and "snipe hunting" are.

You only have four spices in your kitchen: Salt, Pepper,
Ketchup, and Tabasco.

You think everyone from north of Dallas has an accent.

The first day of deer season is a state holiday.

You know whether another Texan is from East, West, North, or South Texas as soon as he opens his mouth .

Going to Wal-mart is a favorite past-time known as "goin Wal-Martin" or "off to Wally-world".

You describe the first cool snap (below 70 degrees) as good
chili-eatin' weather.

A carbonated soft drink isn't a soda, cola, or pop....It's a
Coke regardless of brand or flavor.

Texans understand these jokes. If you don't just come and stay awhile.
Posted by Bryonm at 11:08 AM

amen on the carbonated soft drink...I always ask for a 'coke' but what I really want is a Dr. Pepper!!! They only seem to get this right in Texas and as some select Denny's (not located in Texas)!

thought this was billy's blog for a minute.