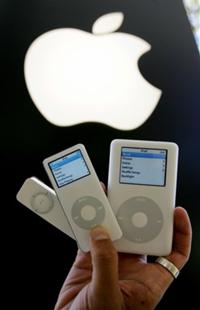 The other day I posted an opinion about Mac computers and Mac marketing and Mac guys in general with a not very nice attitude.

Today is the day I eat humble pie. My ears are burning because I hear all of you Mac people saying, “I told you so.”

For a rare occasion in history, something in the universe is more popular than beer.

Unbelievable, I know. But it’s probably no surprise to the marketing people over at Apple who brought you Mac Colors, Mac Silver, Mac White, and now Mac Black products, but the rest of us, especially PC guys, are astonished. College students across the country have said that the iPod is more “in” than beer (source).

Only one time has anything been more popular than beer. For a short time, the Internet was more “in” than beer. That was in 1997. But in 1997, more people had beer access than Internet access, so way to go Internet.
Posted by Bryonm at 4:02 PM

are you getting closer to converting?

I already have an iPod.

But I REFUSE to jump ship because Mac markets well and SAYS they're all that.

But I love how they made the PC guy look like a nerdy Bill Gates and the Mac guy a cool Abercrombie kind of guy.