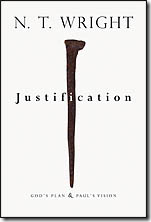 Leading New Testament scholar N.T. Wright has taken C.S. Lewis’s seat at the table. As Lewis changed the way people looked at Christianity, read their Bibles and thought about God in the twentieth century, Wright will do the same in the twenty-first. Like Lewis, Wright has a talent for making difficult biblical concepts accessible to the average person.

He is a primary scholar in the New Perspective on Paul. Wright sheds light on aspects of Paul and his theology that have left to gather dust in the dark corners of church tradition.

Wright's rise to popularity makes him a lightning rod for controversy. He intends to educate, but theological sacred cows are kicked over in the process. Incoming criticism rains down on him from several theological strong-holds. Some he deflects and some he absorbs. His most public fire-fight revolves around his treatment of the Doctrine of Justification.

Opponents say that Wright's New Perspective is out of balance; that examining Paul in a historical Jewish context is a mistake. Wright's answer: "...we end up reading [Paul] as though was really a 17th-century theologian born out of due time..." Wright posits in his book Paul: In Fresh Perspective that most of what we accept about Paul is based on scholarship that has been delivered to the world since the Reformation. But Paul pre-dates the Reformation.

"Right or wrong," writes McKnight, "the New Perspective is the most Protestant move made in the 20th Century -- and by that I only mean that it seeks to get back to the Bible and challenge our beliefs in light of what we find in that Bible."

John Piper leads the assault. In his 2007 book The Future of Justification, Piper attempts to punch holes in Wright's position.

Wright's new book, Justification, is a response to his critics. Wright gives a thorough explanation of justification doctrinally and exegetically from Paul's epistles. Piper, in his book, explains justification against the backdrop of Reformed Tradition appealing mostly to Luther and Calvin rather than re-examining the Bible in its historical context.

Wright does not hide the fact that this is what he believes: That Jesus defeated evil and sin and took our place on the cross. God vindicated Jesus by raising Him from the dead and in our identification with that (the resurrection) we, too, are vindicated. This is what Justification does. Wright says that we are given status as righteous, but that - and here's where the Calvinist's cages get rattled - obedience, morality and virtue are worked out in the believer's life through the Holy Spirit.

But this looks like a works based way of pleasing God the Calvinist traditionalist will say. It looks like "works of the law" are what please God and we all know that this can't be true because only faith pleases God.

Piper disputes Wright’s take on the doctrine of Justification. Piper is convinced that Paul teaches the necessity to know what Justification IS, not just what it DOES. If one doesn’t know what it IS, then one’s understanding of what Christ accomplished on the cross will be misunderstood. In fact, Piper fears that what the church believes about Justification may be distorted for years to come due to Wright’s ever expanding influence.

"Discovering that God is gracious," writes Wright, "rather than a distant bureaucrat or a dangerous tyrant, is the good news that constantly surprises and refreshes us. But we are not the center of the universe. God is not circling around us. We are circling around him. It may look, from our point of view, as though 'me and my salvation' are the be-all and end-all of Christianity. Sadly, many people--many devout Christians!--have preached that way and lived that way. This problem is not peculiar to the churches of the Reformation."

Wright presents justification less in terms of personal conversion and more in terms of "who is in the people of God."

Piper, seems to think covenantal readings belittle Paul. To this, Wright says, "Dealing with sin, saving humans from it, giving them grace, forgiveness, justification, glorification -- all this was the purpose of the single covenant from the beginning, now fulfilled in Jesus Christ".

Justification is embedded in the covenant -- "the saving call of a worldwide family through whom God's saving purposes for the world were to be realized."

Wright uses the imagery of a divine court of law as the controlling environment for justification and he sees God as judge finding in favor --giving righteous status-- of those who believe in Jesus Christ.

The emphasis of Wright's writing is that Christianity runs deep within a person and effects every part of a person's life; it changes the way a person sees the world (as God’s New Creation) and his or her own participation in the world (building for God’s Kingdom here on earth).

"It isn't that God basically wants to condemn and then finds a way to rescue some from that disaster. It is that God longs to bless, to bless lavishly, and so to rescue and bless those in danger of tragedy - and therefore must curse everything that thwarts and destroys the blessing of his world and his people."

Wright's hope is that this robust dialogue between himself and his critics "will send the next generation of thoughtful Christians back to Scripture itself, not to this or that tradition."

Thanks Byron... I will use and reuse this.

Thanks for the review.

I think that it is important to understand Wright in his primary context. He is primarily an academician whose writings are meant for an unbelieving and skeptical intellectual audience, not for church members per se.

Putting the new perspective stuff aside, Wright is one of a small handful of evangelical scholars who the brains at Yale, Harvard, Duke, etc. are willing to dialogue with. He's one of a very small handful.

Thanks for your thoughts. I disagree with your assessment, however, of Wright's audience. His writings are primarily for a church audience. But, as a bonus, he has the credibility and an approach that is welcomed by academics.

The church today needs men like Wright more than ever to stretch them beyond stale traditions that we've accepted to have equal footing with the Word of God.

Admittedly, I have read nothing by either Wright or Piper. Based solely on this review, tho', I suspect I am more in line with Wright.

My background--tho' not my present--lies in a "holiness" tradition that claims "entire sanctification" is God's second work of grace in the believer and leaves one to live in "sinless perfection." As a young adult, I threw in the towel on trying to reconcile that doctrine with my own experience, as well as what I observed in virtually everyone around me.

I believe sanctification is God's grace at work in us; I don't believe in sinless perfection, and I don't believe God's full work in us is accomplished in either one or two easy steps. I see transformation--not the topic of Wright's latest book, but...--as happening through a process in which God leads us, as we are ready to follow and obey. Thus, "obedience, morality and virtue are worked out in the believer's life through the Holy Spirit."

I found this quote from Wright interesting:

"God is not circling around us. We are circling around him. It may look, from our point of view, as though 'me and my salvation' are the be-all and end-all of Christianity. Sadly, many people--many devout Christians!--have preached that way and lived that way. This problem is not peculiar to the churches of the Reformation."

I couldn't agree more, but I fail to see how guys like Piper are guilty of this. Most of Piper's books (God is the Gospel, Desiring God, The Pleasures of God, etc.) would probably wholeheartedly agree with this Wright quote.

I'm not a "New Perspective" expert, but I would love get a better grasp of how Wright understands Paul in passages like Romans 4:2-6, 2 Corinthians 5:21 and Philippians 3:8-9. Does Wright discuss these passages at length in this book?

thanks for your comments. The illustration Wright gives that you quoted illustrates perfectly, in my opinion, Piper's "Christian Hedonism" teaching.

Without looking specifically at the texts you mentioned, I'm not sure how to answer your questions. But I do recommend that you further familiarize yourself with Wright. Whether you totally agree with him or not you will definitely be built up and challenged in your faith.