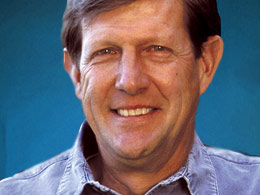 Stafford has served as Compassion’s President since 1993. He is the author of Too Small to Ignore – Why Children Are the Next Big Thing.

Wess opened with a story of a conversation he had with a pastor that was persecuted by Ethiopia’s Marxist regime back in the eighties. (It was under this regime that Ethiopia experienced modern histories’ worst famine – remember Live Aid?) Wess told the pastor that we in America were praying for the church in Ethiopia. The pastor told Wess that they were praying for the church in America. “I heard,” said the pastor, “that because American Christian have so much, they can go an entire hour without talking to God. Is that true?”

Bill Gates, Warren Buffett, and Brad and Angela all understand the concept of to whom much is given, much is required. And they don’t even have an eternal or spiritual mandate or motivation.

The headlines of every newspaper everyday should read:

30,000 PEOPLE DIED IN THE WORLD TODAY BECAUSE THEY WERE TOO POOR TO STAY ALIVE

According to Matthew 25, Jesus is disguised as a little child.

Compassion has become a conduit for churches to help churches; pastors to help pastors. He gave a caution based on Bruce Wilkinson’s recent failure and disillusionment: pastors need to work with pastors; not presidents or parliaments.
Posted by Bryonm at 8:05 AM

I know that a lot of our aid goes to these needs without our necessarily designating it, but we do food shelters, food kitches, food baskets, take meals to children who don't get free lunches in the summer, and food to the elderly in the winter. I love compassion...we've sponsored them since my first son was coming. However, we've struggled with when to break off and sponsor a younger child. It's hard to know when they are able to "fend for themselves". A struggle.

Thanks for highlighting such a great effort. I do recommend doing on online search for ministries that use funds most wisely and least toward administrative costs before you "invest". You'd be surprised.

good post...it made me look at our 'support' for overseas missions in a differnt light.

Maggie - You weren't asking for feedback on your struggle with "when to break off and sponsor a younger child," but may I give you an opinion? Sorry, but I can't hear you saying, "No!" ;~)

I'm also a sponsor, and an advocate for children through Compassion. The older children, meaning those around 10 years and up, are usually the most difficult to find sponsors for. And since Compassion prefers to take them very young, to maximize the benefit to the child, we know that the older kids have almost certainly been sponsored, before. But finding a new sponsor can be a challenge, when they're older. Most people want them young and cute.

There are a number of legitimate reasons for sponsors to have to quit--health and changing finances are but two. But it's hard on the child. Compassion continues to care for them while looking for a new sponsor, but losing the sponsor brings stress these kids don't need. Of course, this presumes a sponsor who had written faithfully, who had nurtured, loved, encouraged and discipled the child. Losing that relationship is like a death.

I sponsor some girls, the oldest (and newest, to me) of whom is 13. I hope all of them are able to continue in their respective programs until they graduate, and I dearly hope God enables me to continue their sponsorship for the full time.

In case you've never made a sponsors tour, I highly recommend it, if you can possibly do it. It's a life-changer!

I'm not sure about my tone, here; my intent is a pleading tone, pleading for the children, and not one of sanctimony. That, I cannot claim.